It was ten years ago today that a huge white fluffy monster named Moose moved into my apartment.

Moose was my first rabbit roommate. (I don’t like to call him a pet! We were roommates in just about every way.) He was pretty amazing.

The day he came home (ten years ago today) is a day I won’t forget. He’d been abandoned a few months earlier, and his foster Mom had really grown quite attached to him. (Who could blame her, he was an amazing bun!) She was crying the whole time, I was crying because she was crying, and on the drive home I started to freak out a bit.

I’d just become a parent. I’d never had to care for another life before, and here I was driving home with my new bunny buddy in the back seat, knowing we’d be together for the rest of his life. It hit me like a ton a bricks that I was now, literally, a parent, and my life was gonna change.

I got him home and opened up the carrier. The very first thing he did was hop around and explore, and then settle down between the two bunny statues I have in my living room. I didn’t plan that, and I didn’t tell him to do it, he just did it. I quickly went to get my camera to capture the moment.

It took us a few days to get to know each other, but eventually we did. I think we bonded completely a few weeks later when I realized that an abscess on his head from an injury he had when he was abandoned was starting to come back. I spent a lot of time with him those first few months cleaning out his wound and helping him to heal up. Trial by fire, I guess!

The good news is that nothing really scared me after that. If I could handle that, I could handle anything, and I did. He had other abscesses throughout his life, and each time they got a little easier to care for. By the time he got the last one it was a total non-issue! We’d moved to Texas by then and the vets there were willing to try all kinds of crazy things that made caring for things like that much easier. (One of the advantages to living so close to one of the best vet schools in the country!) 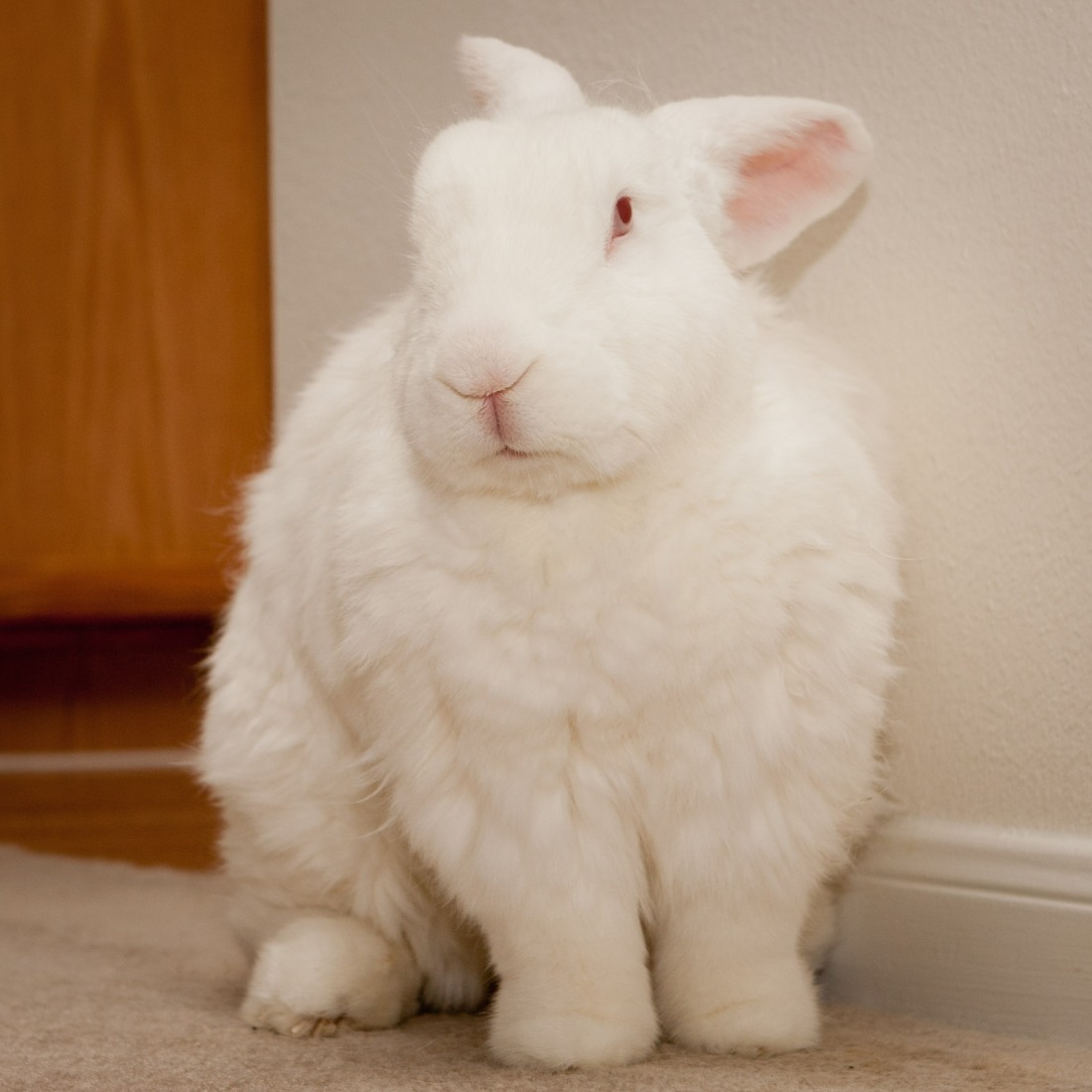 We ended up being bonded about as tightly as a rabbit and someone that just thinks they are a rabbit can be. He was always in the same room with me, but usually not by my side. He liked to be close enough where he could see me, but not so close that I might accidentally try to brush him. Any time I’d get up to change rooms it wouldn’t take very long for the big white rabbit to reappear in the new room with me. (I’d like to say he was sneaky, but he wasn’t. A 14 lbs rabbit does nothing quietly or gracefully!)

Moose lived to be eight years old, which is really old for a Flemish Giant. Larger rabbits don’t life nearly as long as younger ones do. The day I brought him home I made him a promise that when his time came, I would not let him suffer just so that I felt better about myself. I kept that promise.

When it was clear it was his time, and he wasn’t gonna get better, I held his paw the whole way over the rainbow bridge. It was one of the hardest, and saddest things I’d ever had to do in my life, but I know I did the right thing. I promised Moose I wasn’t gonna let him suffer, and I didn’t. He came into this world and lived a rough life, but he left it living like a king with his Mom by his side. (I have tears running down my cheeks as I write this… just thinking back to that time is emotional.)

Moose was the first person to see the real me. I put on a show a lot for him as I was super early in transition when I lost him, and I wasn’t out of the closet yet. He didn’t seem to care, he just liked being with me.

I miss you, bud. I’m sure you’d be very proud and happy to call me your Mom if you could see me today.

Good hopper. Very proud kidfur. Loves all things purple. Snowy’s kiddo. Encourager of all animals to be themselves. 💜 (she/her) View all posts by Bunny